2022 Will Always Be Known As The Year Of The Nepo Babies: See Who They Are

Share on FacebookShare on Twitter
☰ Table of Contents show
1) Who Are Celebrities’ Nepo Babies?
2) What is Nepotism?
3) Why Are Nepo Babies So Popular Among Celebrities?
4) Conclusion

While nepotism isn’t new to any profession, it has been particularly prominent in the entertainment industry.

While some people may think it’s unfair that some celebrities get a leg up over their peers, there are many examples of nepotic success stories in Hollywood. So what is nepotism, and who are some celebrity “nepo-babies”? Let’s take insight from Nepotism Babies on growing up in famous families.

Who Are Celebrities’ Nepo Babies?

You may recognize the new generation of Hollywood stars since you are highly familiar with their parents!

TikTok has become obsessed with nepotism babies. For the uninitiated, a nepotism baby is someone working in Hollywood right now who has some family connection to the industry—usually famous parents.

The idea of “nepotism babies” also opens up an exciting conversation about the world of the Hollywood elite. Do nepo babies deserve their fame? Should we be more critical of them? Are they even all that talented?

See the child actors TikTok has dubbed “nepotism kids” in their first significant roles alongside their parents in their breakout performances, including Deacon Phillippe, Zo Kravitz, Maya Hawke, and more.

Zoey Deutch is a modern-day style icon and perfectly represents the Nepotism Babies trend. She recently starred in The Politician (2019), and her other credits include Vampire Academy, Why Him?, and Beautiful Creatures.

Zoey knows how to make a statement without going overboard. Let Zoey be your fashion inspiration despite being tagged as Nepo-babies. 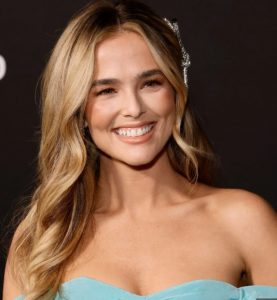 Get inspired by Zoey’s fashion and rock the same effortless cool look she does!

Hudson lambasted the outcry when the term ” nepotism babies ” came under fire in December after a New York Magazine cover story that explored Hollywood’s interconnectedness.

I don’t care about the nepotism issue, Hudson told The Independent. “I look at my kids and I know we’re a storytelling family. Call it what you want, but it won’t change the fact that we are.”

Genetically fortunate Maya Hawke, who has two highly well-known parents, made history in 2019 with her breakthrough performance on Stranger Things. When people first got to know her, they were startled to learn that she comes from a very privileged background – something the actress hasn’t been afraid to admit.

She told Rolling Stone in 2022, “I believe like the only way to tackle the nepotism situation — which clearly provides you tremendous advantages in this world — is, you will have opportunities for free, but the opportunities will not be unlimited.”

That is my ethos: “So you have to keep working and do a good job because if you do a lousy job, the chances will end.”

A segment on a Hailey Bieber episode of Who’s in My Bathroom on YouTube? They both came from well-known families, so they talked about the label.

Paltrow began by saying, “I had a lot of success pretty young,” and then said she thought it was “reasonable” to assume that parents’ success contributed to children’s success.

She stated that “people are eager to tear you down and say, ‘You don’t belong there’ or ‘You are only there because of your dad or your mum’,” but later added, ‘Nobody in the world, especially somebody that doesn’t know you, should hurt your path or the decision that you make.

Hailey said, “I needed to hear this today.

Kravitz opened up about her “deep insecurity” about her career as an actor and the possibility that it will be seen as less than because of her parents when she appeared as the 2022 cover star for GQ.

However, she stood up for the description, saying it is “completely normal for someone to be in the family business.”

If your family was, say, the Black family, you were a blacksmith, she explained, and that’s actually where last names come from.

Apatow, 24, said in a Porter interview published in September that she first found the “nepo baby” label “sad” because people were judging the outside of her talent. ”

I try not to let it get to me because I understand that I’m in such a lucky position. A lot of people (in a similar position) have proven themselves over the years, so I’ve got to keep going and make good work,” she said.

“It’s so early in my career, I don’t have much to show yet, but hopefully one day I’ll be really proud of the stuff I’ve done by myself.”

I don’t have much to show yet, but hopefully, one day, I’ll be incredibly proud of the stuff I’ve done by myself, the actress says candidly, even though she is still in the early stages of her profession.

Lily Collins has established herself in the acting industry thanks to her parts in The Blind Side, Love, Rosie, and more recently, the divisive yet binge-worthy Emily in Paris. Although hardly a household name in Hollywood, her father, Phil Collins, is undoubtedly a legend in his own right. He is most recognized for his work as the drummer and lead singer of the rock band Genesis and for his solo career.

Daughter of Hollywood stars Melanie Griffith and Don Johnson, Dakota Johnson has worked in the entertainment industry since she was a young child. As she’s grown older, she has cultivated a successful career in the film industry and has become known for her work in films such as Fifty Shades of Grey, Suspiria, and Bad Times at the El Royale.

When asked about her famous parents in a 2017 Marie Claire interview, she said, “When I was younger, it definitely felt like people were judging me and my parents more, but as I’ve gotten older, all of that has gone away. I’m proud of my parents, and I think every part of their past has led to who I am now.”

An icon of young Hollywood, Timothée Chalamet didn’t precisely acquire his acting skills from his parents, and they are by no means unremarkable.

He has received critical acclaim for his performances in Call Me By Your Name, Little Women, Dune, Beautiful Boy, and more.

His father, Marc Chalamet, is an American-French writer currently employed as an editor for the United Nations. His mother, Nicole Flender, is a former Broadway dancer who has been his date to numerous awards ceremonies. Pauline, Timothée’s sister, is also an actress; you may know her as Kimberley from The Sex Lives of College Girls.

In Netflix’s Never Have I Ever, the 18-year-old son of Reese Witherspoon and Ryan Phillippe will make his acting debut as a member of a competing debate team from a privileged private school. Dad Ryan made audiences swoon in 1998’s I Know What You Did Last Summer as he attempted to avoid a killer (and looked chiseled doing it) while mom Reese made her celebrated acting debut in 1991’s Man on the Moon at the age of 15.

Nepotism is defined as favoritism based on family relationships rather than merit. In other words, people use their influence to give family members an advantage or preferential treatment regarding career advancement or hiring decisions. This practice can be found in many industries but is especially prevalent in entertainment.

Why Are Nepo Babies So Popular Among Celebrities?

Nepo babies are becoming increasingly popular among celebrities because they allow couples to create a new family unit without the hassle of adoption or surrogacy. It also allows them to form stronger bonds with their new stepchildren and develop a more cohesive family dynamic.

Additionally, for many celebrities, having another child can indicate that their current relationship is solid and lasting—a signal that they are committed to making it work despite their different backgrounds and experiences.

Nepo babies are rapidly becoming more common among celebrities as more stars try to give their kids a head start in life by leveraging their influence as public figures.

But while these kids certainly have advantages that other children don’t have access to, they also work hard to ensure they earn any success they achieve rather than coasting off their parents’ reputations alone!

From fashion designers to entrepreneurs and actors, these nepo babies are quickly making names for themselves all over the globe—and it looks like plenty more accomplishments will come soon!

Stan Lee: The Man Behind the Marvel Universe