Annie Potts Has Starred In Many Blockbusters

When you are a gorgeous actress like Annie Potts, being on screen, no matter the year or generation, comes easy to you. Annie Potts was in the first Ghostbusters movie in 1984; she was also there in the second in 1989, and she was also cast in Ghostbusters in 2016 and Ghostbusters: Afterlife in 2021. In all of these, she played the role of the beautiful Ghostbusters receptionist Janine Melnitz, and in each, she was gorgeous as ever. Prior to Ghostbusters, Annie Potts had already been making a name for herself, earning a Golden Globe nomination for the adventure-comedy film Corvette Summer. Still, one might recognize her when she speaks, as she was the one who voiced over the character of Bo Beep in all of the Toy Story animated films that she was part of. She was also in a number of TV shows that include Love & War, Any Day Now, and the most recent one, being Young Sheldon.

Annie Potts on the set of Young Sheldon

How old is Annie Potts?

Annie Potts was born on October 28, 1952. It is amazing to think that Annie Potts is [age birthday=”10/28/1952″] years old. She was born under the star sign Scorpio, and people born under this star sign are known to be honest and ambitious.

What is Annie Potts doing now?

Annie Potts is still doing what she does and loves best: acting and playing unique roles. She has recently wrapped up her role as Bo Beep, Woody’s romantic interest, in the Toy Story movie franchise. On TV, she’s continuing with roles in shows such as those in the sitcom Young Sheldon. She has been cast in many other well-known TV shows in the past including Boston Legal, NCIS New Orleans, and Grey’s Anatomy. Annie Potts is also a board member in a private women’s educational institution. She is indeed a woman of great talent and many occupations.

Take a look at some of Annie Potts’ best roles

What is the nationality of Annie Potts?

Annie Potts was born in Nashville in Tennessee. She is American.

How tall is Annie Potts?

Who is Annie Potts married to?

Annie Potts has been married three times. Her first marriage was with Steven Hartley from 1973 to 1978. The second was with the late TV actor and producer Greg Antonacci. They were married for 2 years. A year after her divorce, Annie Potts married Scott Senechal. The couple was together for eight years until their divorce in 1989. Finally, Annie Potts got married to another television show producer and director in the person of James Hayman. They’ve remained married to date.

How much is Annie Potts’s net worth?

Annie Potts is said to have a net worth of around $12 million.

How many kids does Annie Potts have?

Annie Potts has three sons. They are Scott Senechal, the eldest, followed by James and Harry with her current husband James.

Annie Potts with husband James and her two youngest sons at the Toy Story 2 premiere, 1999 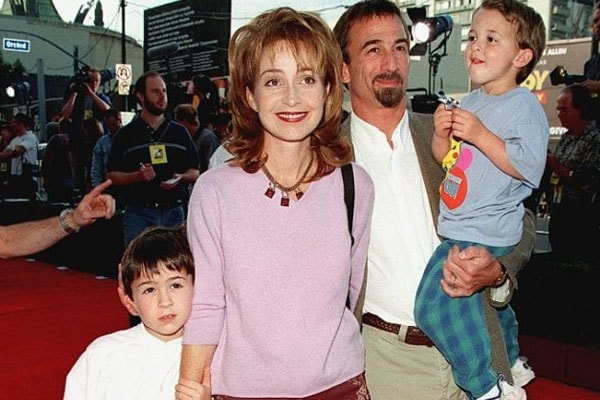