by Chenie Taton
in Musicians
0
Share on FacebookShare on Twitter
☰ Table of Contents show
1) What is their Net Worth?
2) Beyonce’s Background:
3) Beyoncé’s Albums:
4) Jay-Z’s Background:
5) Jay-Z Albums:
6) What are their Popular Songs?
7) The Beginning of Their Relationship
8) The Ups and Downs of Their Relationship
9) Do They Have Children?
10) Broken Marriage Rumors
11) Marriage Divorce
12) How Will This Affect Their Careers?
13) Thoughts 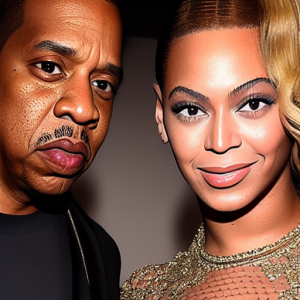 Beyoncé and Jay-Z are one of the most successful couples in the music industry. They have won numerous awards together and have sold over 100 million records as a duo. The pair is also known for their philanthropic work and they have donated millions of dollars to various charities over the years.

What is their Net Worth?

The couple is currently worth an estimated $1.4 billion and they are considered one of the richest couples in the world. Beyoncé and Jay-Z continue to dominate the music industry and their relationship is still going strong after all these years.

Get To Know the Couple

Born and raised in Houston, Texas, Beyoncé Knowles is a singer, songwriter, dancer, and actress. She first rose to fame as the lead singer of the R&B group Destiny’s Child, one of the best-selling girl groups of all time. Her solo career took off after the release of her debut album, Dangerously in Love, in 2003. The album featured the hit singles “Crazy in Love” and “Baby Boy,” and won five Grammy Awards. Beyoncé has since released four more solo albums, all of which have been hugely successful. She is widely considered to be one of the most successful and talented entertainers in the world.

Who are her Parents:

Beyoncé’s parents are Mathew and Tina Knowles. Her father, Mathew, is a music producer, and her mother, Tina, is a fashion designer. She has one sister, Solange, who is also a successful singer and songwriter.

Beyoncé attended Parkwood Elementary School and St. Mary’s Montessori School in Houston, Texas. She then went on to study at the High School for the Visual and Performing Arts before dropping out to pursue her music career.

How Old is She?

Born Shawn Carter in Brooklyn, New York, Jay-Z is a rapper, songwriter, record producer, and entrepreneur. He first rose to fame with the release of his debut album, Reasonable Doubt, in 1996. Since then, he has released thirteen more albums, all of which have been certified platinum or higher. He is one of the best-selling artists of all time, with over 100 million albums sold worldwide. In addition to his musical success, Jay-Z has also founded the clothing line Rocawear and the entertainment company Roc Nation.

Who are his Parents:

Jay-Z’s parents are Gloria Carter and Adness Reeves. His father, Adness, was a drug dealer, and his mother, Gloria, was a secretary. He has three sisters: Andrea, Michelle, and Veronica.

Jay-Z attended Eli Whitney High School in Brooklyn, New York, but he dropped out before graduating.

How Old is He?

What are their Popular Songs?

“Single Ladies (Put a Ring on It)”

The Beginning of Their Relationship

Beyoncé and Jay-Z first met when she was just 18 years old and he was 22. At the time, Beyoncé was a member of Destiny’s Child and Jay-Z was an up-and-coming rapper. They reportedly started dating in 2002, but they kept their relationship relatively private. In April 2008, they announced that they were married.

The pair have since collaborated on several projects, including the song “Crazy in Love” and Watch the Throne album. They have also appeared together in several music videos, including ” Drunk in Love” and ” On the Run.”

The Ups and Downs of Their Relationship

Like all relationships, Beyoncé and Jay-Z have had their share of ups and downs. In 2014, rumors surfaced that Jay-Z had cheated on Beyoncé with a woman named Rachel Roy. The rumors were never confirmed, but they led to the release of Beyoncé’s album Lemonade, which seemed to address the rumors head-on. Later that year, Jay-Z released his album, 4:44, in which he appeared to confess to cheating on Beyoncé.

Do They Have Children?

Beyoncé and Jay-Z have three children together: daughter Blue Ivy Carter, born in 2012, and twins Rumi and Sir Carter, born in 2017. The pair has stated that they are committed to co-parenting their children and providing them with a stable and loving home life.

In early 2018, rumors began to circulate that Beyoncé and Jay-Z were on the verge of getting a divorce. The rumors were fueled by a series of leaked videos and photos that seemed to show the pair arguing with each other. However, Beyoncé and Jay-Z have not confirmed or denied the rumors and they continue to appear together in public.

In June 2018, it was reported that the pair had been living in separate homes for over a year. Additionally, Jay-Z has been seen without his wedding ring on several occasions. Only time will tell if Beyoncé and Jay-Z will stay together or if they will go their separate ways.

How Will This Affect Their Careers?

So, there you have it—some of the possible reasons behind Beyonce and Jay-Z’s marital problems. Of course, only they know what went wrong, but it’s clear that their relationship is in a very bad place right now. We’ll just have to wait and see if they can work things out or if this is the end of the “Beyoncé and Jay-Z era.”Divorce