Miami Vice is one of the most iconic American cop-chasing-bad-guys shows on television. It was so iconic that it was made into a film back in 2006. However, what made it truly one of the most successful TV shows particularly in the 80s was the man who played the role of Sonny Crockett, no other than Don Johnson himself. For his excellent portrayal of the role, Don Johnson won a Golden Globe award. Before Miami Vice, Don Johnson had been acting both on stage and on the big screen. His first brush with show business was when he took the lead role in the play Fortune and Men’s Eyes. He also starred in a couple of less-known films such as Zacharia and A Boy and His Dog just to name a few. All of these endeavors he did in the 1970s; fortunately for Don Johnson, he was cast as Sonny Crocket, undercover police who’s out to catch criminals while donning expensive attires and riding his fast car. Because of the show’s success, Don Johnson reprised the role, this time in the show Nash Bridges. Although there are indeed many attempts to make similar TV shows such as Miami Vice, none other was as iconic and as successful as Don Johnson. Don Johnson is also a well-known powerboat racing champion.

How old was Don Johnson in Miami Vice?

The handsome Don Johnson was no longer a spring chicken when he first played Sonny Crockett in Miami Vice. At the time of its first airing in 1984, Don Johnson was already 34 years old. As handsome and dashing as he is, it took years before Don Johnson got his big break in show business. But Don Johnson is now [age birthday=”12/15/1949″] years old.

What car did Don Johnson drive in Miami Vice?

Don Johnson drove a Ferrari 365 GTB/4 Daytona car in Miami Vice. This two-seater sports car was perfect for the classy Sonny Crockett driving around town with his partner Ricardo Tubbs (played by Philip Michael Thomas) in the passenger seat. 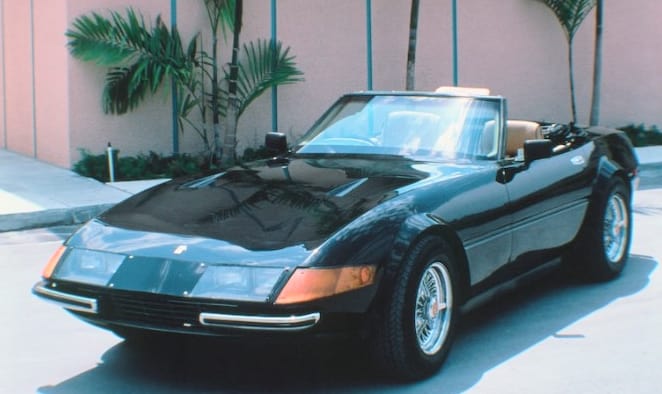 What is Don Johnson doing these days?

Don Johnson is pretty much satisfied with his successes in show business and in life. He is a cast member and plays an important role in the TV show Watchmen. There is news that says that a Nash Bridges movie is in the works.

Where does Don Johnson live now?

Although it is unclear where Don Johnson lives now, he has been spotted here and there, one of the most recent being in London for the premiere of his film Knives Out. Don Johnson is quite happy to have finally settled with his wife Kelley Phleger who was a Montessori school teacher. Don Johnson’s name is rightfully enshrined in the Hollywood Walk of Fame.

Don Johnson has had a colorful married life. He was married twice to two unidentified women prior his marriage to the famous actress Melanie Griffith. When he first married Melanie Griffith in 1976, their marriage lasted only four months. Eventually, the two would be together again and remarry in 1989. During the time Don Johnson and Melanie Griffith were apart, Don Johnson had a relationship with another actress in the person of Patti D’Arbanville. Around 1998, Don Johnson hooked up with award-winning actress and singer Barbara Streisand. There were also rumors that he dated Uma Thurman who was only 18 years old at the time. These days, Don Johnson is happy to have finally settled with his wife Kelley Phleger.

Where is Don Johnson from?

Don Johnson was born in Missouri. He is American. He grew up in Kansas, while living in difficult conditions due to poverty.

What is Don Johnson’s height?

How much is Don Johnson’s net worth?

Don Johnson has an estimated net worth of $50 million.

How many kids does Don Johnson have?

Don Johnson has 5 children, a number of them have become successful in show business as well. His children come from his relationships. The first was a son in the person of actor and songwriter Jesse Johnson. The next was his daughter Dakota Johnson. Dakota Johnson is a beautiful model who was already famous even before graduating from high school. Following Dakota was another daughter in the person of Grace Johnson who is also a model herself. Then, there are two youngest, both boys in the persons of Jasper Johnson and Deacon Johnson. Their ages are four years apart.

See what Don Johnson’s tweeting about

How To Stay Friends With Your Exes, According To Gwyneth And Her Conscious Uncoupling Goals