The Dramatic Divorce of Johnny Depp and Amber Heard

by Chenie Taton
in Models, Movie Actors, Movie Actresses
0
Share on FacebookShare on Twitter
☰ Table of Contents show
1) The Relationship Between Johnny Depp and Amber Heard
2) Amber Heard’s Allegations of Domestic Violence
3) Johnny Depp’s Denial of the Allegations
4) How their Marriage End
5) The Aftermath of the Divorce
6) Depp Won the Latest Trial Vs. Amber Heard
7) Conclusion 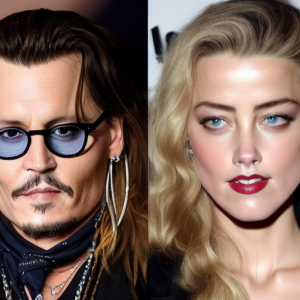 It was a shocking split that made headlines around the world. The couple had seemed happy in the public eye, but rumors of abuse and fights had been swirling for some time. In court documents, Heard alleged that Depp had been physically and emotionally abusive throughout their relationship. A restraining order was granted to Heard, and the divorce proceedings were messy and highly publicized.

The Relationship Between Johnny Depp and Amber Heard

After a four-year relationship, Depp and Heard got engaged in January 2014. They married in a private civil ceremony at their home in Los Angeles on February 03, 2015.

However, after only 15 months of marriage, Heard filed for divorce from Depp on May 23, 2016, citing irreconcilable differences. The divorce was finalized on January 13, 2017. Throughout their relationship and during their divorce proceedings, both Depp and Heard accused each other of domestic violence.

In May 2016, Depp’s mother died and Heard did not attend the funeral. This caused further strain on their relationship. In August 2016, Depp’s former managers told him that he needed to sober up and get help for his drinking problem or they would no longer work with him.

On May 23, 2016, the day she filed for divorce, Heard was granted a temporary restraining order against Depp. In her filing, Heard accused Depp of hitting her, throwing objects at her, and putting her in fear for her life.

Heard provided photographic evidence of injuries she allegedly sustained during a fight with Depp in December 2015. She also submitted a video to the court that showed Depp smashing objects and yelling in their apartment.

Depp denied all of Heard’s allegations of abuse and claimed that she was making them up as part of a “scheme” to secure a favorable divorce settlement. He accused her of being the abusive one in the relationship and submitted evidence of text messages and photos that he claimed showed Heard being violent towards him.

In August 2016, a judge denied Depp’s request to have the restraining order lifted.

Johnny Depp’s Denial of the Allegations

Throughout the divorce proceedings, Depp denied all of Heard’s allegations of domestic violence. He accused her of making them up as part of a “scheme” to secure a favorable divorce settlement and claimed that she was the abusive one in the relationship.

Depp submitted evidence of text messages and photos that he claimed showed Heard being violent towards him. He also accused her of having a “calculating, manipulative and destructive” personality.

In November 2016, Depp’s lawyers filed a motion to have Heard’s allegations of abuse excluded from the divorce proceedings. They claimed that she had “made up these horrific lies about Mr. Depp in an attempt to secure a premature financial resolution.”

The motion was denied and the judge ruled that Heard’s allegations of abuse were “relevant to the issues in this case.”

How their Marriage End

On January 13, 2017, the divorce between Johnny Depp and Amber Heard was finalized. The judge ruled that there was no evidence that Depp had committed domestic violence and said that Heard’s allegations were “not credible.”

Heard was awarded $7 million in the divorce settlement, which she donated to charity. She released a statement saying that she was “pleased to be able to move on” with her life.

Depp and Heard have both since moved on with their lives. Depp is currently dating actress and model, Lily-Rose Depp. Heard is dating entrepreneur, Elon Musk.

The Aftermath of the Divorce

The pair settled in August 2016, but the details of the settlement were not made public.

Since the end of their relationship, both Depp and Heard have spoken out about domestic violence. In December 2018, Depp denied Heard’s allegations of abuse in an interview with Rolling Stone magazine. In March 2019, Heard spoke about her experience as a victim of domestic violence in an op-ed for the Washington Post.

The Depp-Heard divorce was a highly publicized case that brought attention to the issue of domestic violence. The allegations made by Heard against Depp shone a light on the problem of abusive relationships and the difficulties that victims face when trying to leave their abusers.

It’s been a long and hard battle, but Johnny Depp has finally won the latest trial against his ex-wife Amber Heard. This follows the previous win in their defamation case in the U.K.

The couple married in February 2015 but by May that year, Heard had filed for divorce and obtained a temporary restraining order against Depp. In her filing, she accused Depp of physical and emotional abuse during their marriage, p

Johnny Depp’s legal team has long maintained that Ms. Heard fabricated those claims to secure a financial settlement in their divorce, which she received in August 2016. Mr. Depp has consistently denied these allegations and fought back against them both in court and in the public eye.

In November 2018, a U.S. judge ruled that Heard’s allegations of abuse were “not credible” and denied her request for a permanent restraining order. The judge did not find evidence to support Heard’s claims of domestic violence.

In the latest trial, a judge in the High Court in London ruled that Depp did not commit domestic violence against Heard and ordered her to pay his legal fees.

This decision is a huge victory for Depp, who has been fighting to clear his name for years. It also sets a precedent for other cases of alleged domestic violence, proving that victims cannot make false claims without facing serious consequences.

The ruling is also a victory for men who have been falsely accused of domestic violence. Too often, these men are treated as guilty until proven innocent, and their lives are ruined even if they are ultimately cleared of the charges.

This case shows that it is possible to fight back against false accusations and ultimately clear your name. If you have been falsely accused of domestic violence, you should not give up hope. You may be able to prove your innocence and get your life back on track.

If you or someone you know has been accused of domestic violence, contact an experienced attorney who can help you navigate the legal system and protect your rights.

Miley Cyrus’ Career Revolution: 8 Things She Did to Transform Her Life and Career