by Lucy Jackson
in Behind The Scenes, Movie Actresses
0

At a young age, Zoey Deutch has already achieved much in the field of show business. By the age of 25 years old, she had received recognition for her work as an actress and as a producer.

Only 15 years old when she first appeared on screen in the Disney Channel sitcom The Suite Life on Deck, she quickly moved into the fantasy and horror genre, with roles in the films Beautiful Creatures and Vampire Academy. Going on, in 2016 she worked closely with the great filmmaker Richard Linklater in Everybody Wants Some. She has also played major characters in numerous box office smashes, including The Politician, Zombieland: Double Tap, and The Year of Spectacular Men.

During 2020, she took her talents into the modeling world, where she appeared in the Fendi Peekaboo bag campaign. Loving the vibes, Zoey said “It was one of my favorite shooting days ever,” – and no doubt she took home the stunning bag, making her day even better!

Never afraid to speak out for causes she believes in, Zoey Deutch supports pro-choice organization Planned Parenthood, works to support orphanages in Mexico, and champions the anti-sexual harassment movement Time’s Up.

Zoey Deutch getting her postal vote in

Who is Zoey Deutch dating?

The mesmerizing Zoey Deutch dated the equally gorg actor Avan Jogia. The two started dating in 2012 when they were only 17 and 19 years old respectively. Their relationship lasted for 5 years. They broke up during the production of Year of Spectacular Men, which was produced and directed by members of the Deutch family – her mother, Lea Thompson, and sister!

A few years later, in 2019, Zoey Deutch dated producer and director Dylan Hayes, and they are still the happy couple one year later.

Does Zoey Deutch have any kids?

No, Zoey Deutch doesn’t have any kids.

Who are Zoey Deutch’s parents?

Zoey Deutch has beauty and talent running through her veins, with her mother being American actress and filmmaker Lea Thompson. Her father is the film and TV director Howard Deutch. It was on the set of the romantic film Some Kind of Wonderful where Zoey’s parents met.

What is Zoey Deutch’s full name?

What is Zoey Deutch’s nationality?

Zoey Deutch was born in Los Angeles, California, and is American. She has Russian, Polish, Irish, German, and Dutch lineage. Born on November 10, 1994, she is now 27 years old.

What is the height and weight of Zoey Deutch?

What is the net worth of Zoey Deutch?

Zoey Deutch has a net worth of $4 million.

With special thanks to Elizabeth Stewart. 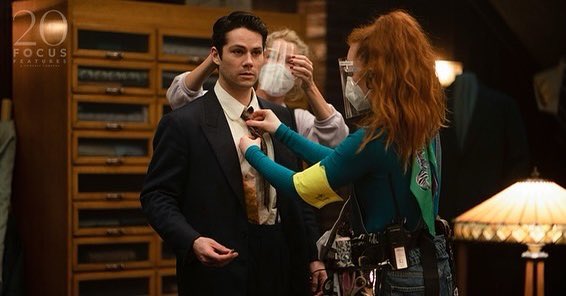 Behind every well-tailored film is a team of master craftsmen  ✃

The film, costarring Dylan O'Brien, will be released on Hulu on Aug. 5, WWD has learned exclusively.

Zoey Deutch and Dylan O'Brien (who currently costar in “The Outfit”) will reunite on screen for “Not...